Ecological economics is a growing transdisciplinary field that aims to improve and expand economic theory to integrate the earth’s natural systems, human values and human health and well-being. In conventional economics, the primary goal is to increase goods and services produced by human industries (built capital), and the gross domestic product (GDP) is a national measure of the total value of goods and services produced annually. Conventional economics assumes that ever-increasing GDP is desirable, possible, and that everyone benefits.

Ecological economics takes a broader perspective and recognizes that there are more things that contribute to human well-being than just the amount of stuff, such as health and education (human capital), friends and family (social capital) and the contribution of the earth and its biological and physical systems (natural capital). Its goal is to develop a deeper scientific understanding of the complex linkages between human and natural systems, and to use that understanding to develop effective policies that will lead to a world which is ecologically sustainable, has a fair distribution of resources (both between groups and generations of humans and between humans and other species), and efficiently allocates scarce resources including “natural” and “social” capital...

• Natural capital is a traditional and re-emerging view that recognizes the importance and value of the goods and services provided by nature. It goes beyond the traditional consideration of natural products as raw materials for conversion into goods (trees into houses or paper) to consider functions that are provided by planetary systems (breathable air, a stable climate) or local ecosystems (flood protection by coastal wetlands, and drinking water purification by forests). Sometimes the monetary value of these ecosystem services can be calculated, such as the cost to replace them with built capital (coastal wetlands with levees). However, some natural services are priceless. They are essential for life, and irreplaceable (breathable air)...

What is sustainability and how does it relate to Ecological Economics?

Economic efficiency and good economic decision making are not possible if all of the costs and benefits are not considered or included in prices. Often current market prices do not capture the full costs of an economic activity that depletes resources or damages natural systems (natural capital); or inflicts costs to human health and well-being (social and human capitals) caused by pollution or other side effects of the activity. These excluded costs are called "externalities", defined as costs that are not included in the price of the product but are shouldered by a third party, outside the producer/seller and buyer/consumer. Capture of these costs in the market would provide a powerful incentive to move towards sustainability.

Environmental economics, the economics of natural resources, sustainable development, green economics, sustainability science, bioeconomics, ecodevelopment: the disciplines and concepts situated at the crossroads of environmentalism and economics are many. This article examines “ecological economics,” a field that has achieved academic recognition and launched numerous debates...

There are many different perspectives from which economics considers the environment... Environmental economics has emerged recently, now with thousands of researchers across the globe...

No economist who adheres to ecological economics accepts the hypothesis that natural capital can be substituted (depleted) ad infinitum or that “backstop technologies” (accelerated growth) can solve the problem of scarcity.

Ecological economics essential traits are an interest in nature, justice, and time, all of which are overlooked by standard economics.

Perhaps more than other disciplines aspiring to be sciences, environmental ecologists have developed normative frameworks at the same time as they have constructed analytical tools. The field is constantly developing and interrogating concepts with a normative tenor, such as “sustainability,” “resilience,” and “environmental assessment.”

Ecological economics/eco-economics refers to both a transdisciplinary and interdisciplinary field of academic research that aims to address the interdependence and coevolution of human economies and natural ecosystems over time and space. It is distinguished from environmental economics, which is the mainstream economic analysis of the environment, by its treatment of the economy as a subsystem of the ecosystem and its emphasis upon preserving natural capital. One survey of German economists found that ecological and environmental economics are different schools of economic thought, with ecological economists emphasizing strong sustainability and rejecting the proposition that natural capital can be substituted by human-made capital.

Ecological economics was founded as a modern movement in the works of and interactions between various European and American academics (see the section on history and development below). The related field of green economics is, in general, a more politically applied form of the subject.

Some key concepts of what is now ecological economics are evident in the writings of E.F. Schumacher, whose book Small Is Beautiful – A Study of Economics as if People Mattered (1973) was published just a few years before the first edition of Herman Daly's comprehensive and persuasive Steady-State Economics (1977). Other figures include ecologists C.S. Holling, H.T. Odum and Robert Costanza, biologist Gretchen Daily and physicist Robert Ayres. CUNY geography professor David Harvey explicitly added ecological concerns to political economic literature. This parallel development in political economy has been continued by analysts such as sociologist John Bellamy Foster.

The Birth of the Anthropocene by Jeremy Davies

Facing the Anthropocene: Fossil Capitalism and the Crisis of the Earth System by Ian Angus

After Nature: A Politics for the Anthropocene by Jedediah Purdy

The Shock of the Anthropocene: The Earth, History and Us by Christophe Bonneuil & Jean-Baptiste Fressoz

SJS / Siterunner: An eventful debate is underway. The academic version of the debate speaks of political economy, macro/micro-economics, and classic versus contemporary economics.

An alternative approach, one that speaks of "greening economics" and a new field of "eco-nomics" looks to improve economics as eco-nomics.

Green politics is exploring the contradictions and costs of economic "business-as-usual" -- from the financial services industry and 'too big to fail' subsidization to 'money in politics' and its impact on foreign and domestic policy, war spending and national debt, falling income and collapsing infrastructure. At the business org level, new ideas are being interjected into day-to-day planning and operations, ideas as in 'sustainability', 'energy efficiency', 'direct participation of shareholders/stakeholders' and a diverse set of green eco-solutions with both short- and long-term vision.

One of the leading Green economic thinkers is Richard Wolff, a founding member of the Green Party of New Haven, Connecticut, and its mayoral candidate in 1985.

Here he speaks of the study of economic systems from a classic point of view and the New School of Social Research (where your GreenPolicy siterunner studied graduate economics.

Richard Wolff in a 2013 interview:

"[E]verything you expect about how the world works probably will be changed in your life, that unexpected things happen, often tragic things happen, and being flexible, being aware of a whole range of different things that happen in the world, is not just a good idea as a thinking person, but it’s crucial to your survival.

New economics via Robert Pollin of the New School for Social Research, an important contributor to what we now see as a paradigm of green eco-nomic thought as developed by your GreenPolicy360 siterunner and in the economic thought of the founding US Green Party platform. 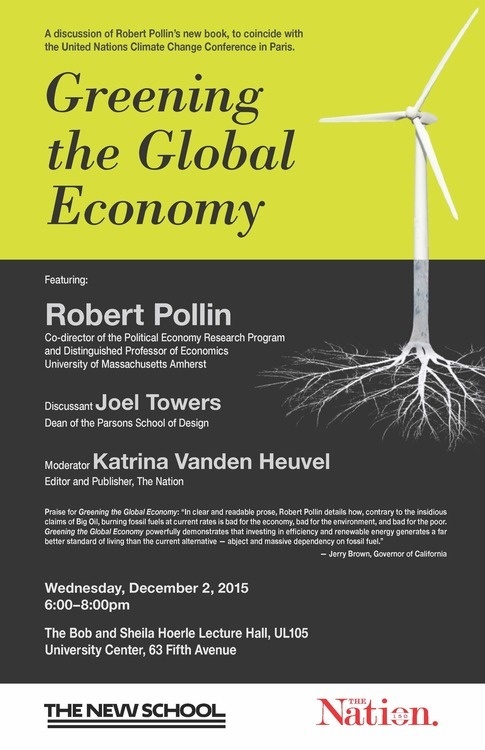 SJS / Siterunner: Again, looking back to the Graduate Faculty of the New School in New York, to David M Gordon, who passed away at a young age in 1996. David spoke of long-term economics and coined the phrase “social structure of accumulation” (SSA) that speaks of the need to consider multi-generation impacts of economic activity. Let's look back -- and forward -- at a number of these ideas with Thomas Weisskopf who contributes in 2014 to the David Gordon Memorial Lecture --- Reflections on 50 Years of Radical Political Economy. The concept of 'radical' speaks of alternatives to neoclassic/neoliberal economics as new threads emerge responding to economic and environmental challenges.

The second generation of ecological economics: How far has the apple fallen from the tree?

Ecological economics was first created as a forum providing space for criticizing 'normal science, i.e. science based on an oversimplification of complex issues and aiming at predictions.

This category has the following 5 subcategories, out of 5 total.